The Imam was reportedly kidnapped by unknown persons before the unfortunate incident.

It is a sad time for the family members of the Chief Imam of Atiba, Ijebu Ode, Alhaji Musafau Bakare after he was found dead.

The Imam was reportedly kidnapped by unknown persons before the unfortunate incident.

Details of the incident are still sketchy at the time of this report, but it was gathered that the deceased was abducted on Wednesday night, August 11.

He was reportedly found dead inside his newly acquired Toyota highlander in the early hours of Thursday, by police officers attached to Obalende District Police Station, Ijebu Ode.

The cleric will be laid to rest today by 10:00am at Atiba.

Meanwhile, friends have taken to social media to mourn the deceased cleric. 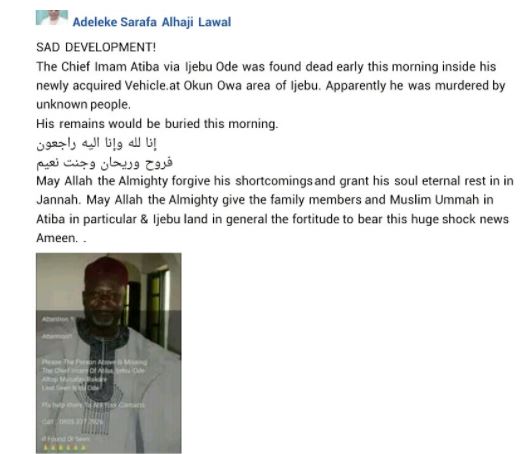 #He Is Not Our Pilot – Azman Air Disowns Dangote’s Son-In-Law, Capt Jamil Abubakar Over Backlash On Blasphemy Comment

#Thousands Rally Across US For Abortion Rights

Quote of the Day
What you see depends on what you're looking for.
LAGOS WEATHER